What about Compressed Natural Gas ?

COMPRESSED NATURAL GAS:  Growth in CNG-powered vehicles is vital to America’s move towards energy independence. That will take both a reduction in cost and an increase in distribution. Here, FPG TechnologiesTM could be a game changer !
​Not only does it address the single biggest expense associated with CNG production, the electricity required to compress it –
​but it could also be the key to a future network of low cost, private CNG refueling stations.

Can FPG technology greatly reduce our dependency on "The Grid" ?

The U.S. Energy Information Administration expects natural gas to account for 60% of the projected growth in the U.S. power generation capacity through 2035, indicating continued growth in the sector for decades to come. How does Free Pressure Generation fit into that future?  With over a million wells in the U.S alone, thousands can produce enough pressure and volume to run at least one FPG 3000. IDK Technologies sees a substantial market opportunity spanning a broad spectrum of residential, commercial, and industrial applications including, but not limited to:
RESIDENTIAL NET METERING:  Residential electricity in the U.S. averages 11¢/kWh, with a typical American household using 12,000kWh per year. One FPG 3000TM can offset 100% of that demand while generating a 204MWh net surplus of energy that could be sold back to the grid at 6.5 to 10¢ per kWh. In this case, one FPG 3000TM could deliver over $15,000 per year in positive cash flow, excluding any renewable energy credits it may qualify for. 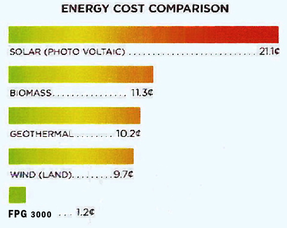 100% Green Energy...
Every kilowatt of clean energy produced is one less kilowatt of demand placed on a fossil-fueled grid. With that in mind, one FPG is capable of offsetting demand by as much as 216MWh per year, the equivalent of taking approximately 80 passenger cars off the road. In terms of cost per kilowatt hour, an FPG outperforms even the most efficient fossil fuel burning technologies, but its sub-megawatt scale makes the comparison academic. The more appropriate match-up would appear to be with other zero-emissions, small scale energy sources.
Based on the findings of the U.S Energy Information Administration's 2011 Report, the FPG produces electricity 8 times more cost effectively than wind power and 17 times more efficient than solar panels. To put it in perspective, it would take over $1 million in solar panels covering 20 acres to match the 24/7, rain or shine output of one 25kWh FPG !!! 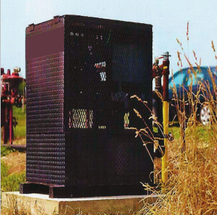 1st Prototype
$$$ & Sense...
FPG technology can turn a gas well into a personal power plant. With adequate well pressure and volume, a 25kW FPG  can product up to 18,000kWh of electricity per month - 8 times more than the average American household consumes.  At a 7.5₵ selling price per kWh with 18,000kWh produced per month, an FPG pays for itself in only 23 months. The higher offset energy cost and wholesale buy-back rate, the faster the return on your investment. When you factor in the value of the renewable energy credits the FPG may qualify for... it only gets better!
RETURN TO PREV PAGE
GO TO NEXT PAGE